Malaysia uses the differentiation in passport stamp colours - entry in purple, exit in red - to quickly trace a passport holder's movements. The stamp can be rectangular, circular or oval. A stamp activates or acknowledges the continuing leave conferred in the passport bearer's entry clearance.

A peculiarity is the autonomy of the Malaysian states of Sabah and Sarawak in immigration affairs. Foreigners who travel to the two states from Peninsular Malaysia are required to fill in immigration forms and get new stamps on their passports. There is also immigration control for travel between Sabah and Sarawak. Previously, Malaysian citizens from the Peninsular were required to present their passports and have them stamped as well; while they are currently still subject to immigration control, passports are no longer required for social visits not more than three months.

Between 1998 and 2011, foreigners who entered Malaysia via train from Singapore were cleared electronically without their passports being stamped. The change was due to the dispute between Malaysia and Singapore regarding Malaysian-owned railway land in Singapore. The Malaysian railway operator, Keretapi Tanah Melayu (KTM) had its intercity rail southern terminus at Tanjong Pagar railway station in downtown Singapore, which also housed the border controls of both Malaysia and Singapore for rail passengers before 1998. In 1998, Singapore moved its immigration checkpoint northward to Woodlands Train Checkpoint near the actual Malaysia-Singapore border but Malaysia refused to move its checkpoint, resulting in the anomaly that passengers travelling towards Malaysia were granted entry to Malaysia before passing through Singapore exit controls. Instead of passport stamps, foreigners were given disembarkation cards stamped with "KTM Tg Pagar, Singapura" and the date of entry, which would be collected upon departure from Malaysia and a handwritten note indicating the entry would be endorsed in the passport along with the exit stamp. Passengers travelling to Singapore were not affected as Malaysian exit controls were carried out onboard trains at the Johor Bahru railway station, where immigration officers endorsed passports by stamping or handwriting. The anomaly was resolved on 1 July 2011, when Tanjong Pagar railway station was closed and Woodlands Train Checkpoint became the railway terminus in Singapore with co-location of border control facilities of both countries. Foreigners entering Malaysia by rail have their passports checked and stamped by Malaysian immigration officers at Woodlands Train Checkpoint after clearing Singapore exit controls. 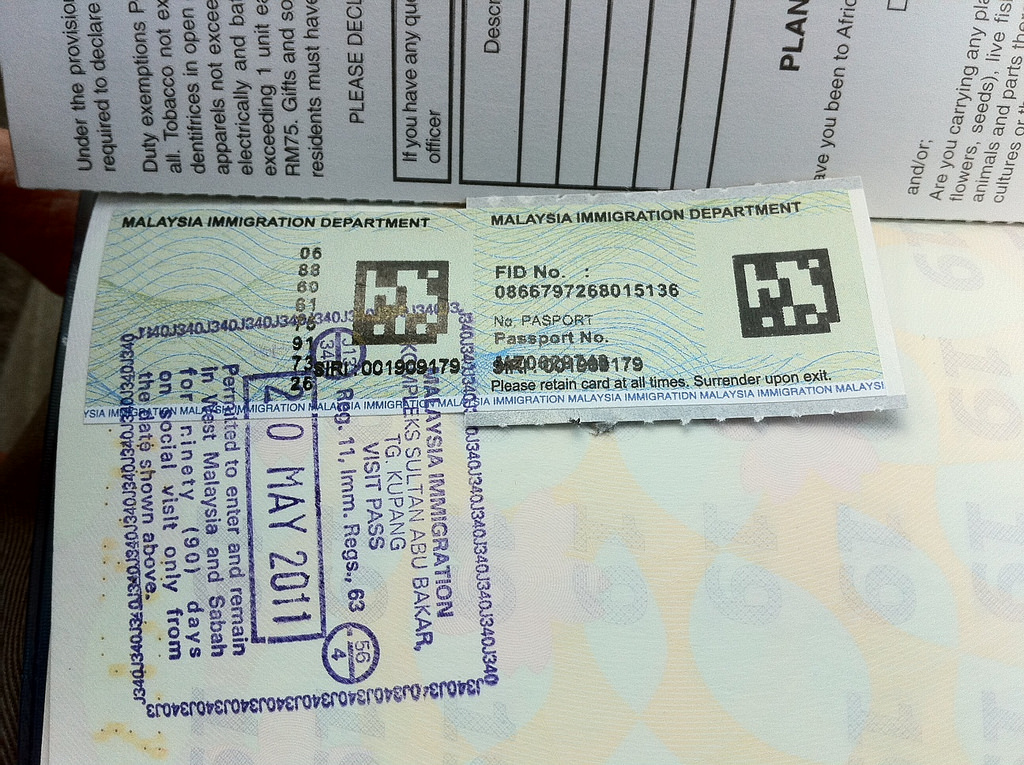 A biometric collection system, National Foreigners Enforcement and Registration System (NERS) awarded to Akrab Makmur Sdn Bhd, was implemented by Malaysian authorities at all entry and exit points in Malaysia on 01 June 2011. It was meant to replace the entry stamp but due to another rule, entry inked-stamp was still required along with the sticker. It was intended to monitor and manage the entry of foreign nationals which comprised workers, tourists, traders and students besides illegal immigrants. It was hoped that the system will be able to tackle issues on the forging of documents, overstaying, and the abuse of visas passes and permits.

The collection of biometrics from both left and right index fingers will apply to all foreigners entering and leaving Malaysia, with the exception of Diplomatic Passport holders, disabled passengers, and children below the age of 12.

Green colour strip with a QR Code, of which only half of it is pasted into the passport (the other half is left flapping as it is supposed to be removed when the holder leaves Malaysia). The immigration stamp is stamped across this strip.

NERS is the latest finger database to be introduced in Malaysia. The purpose of NERS is to collect fingerprints of non-Malaysians who enter the country, as well as non-Malaysians already working in the country. NERS fingerprint capture will be done at 96 immigration entry and exit points in the country. As of July 27th 2011, 390,404 non-Malaysian workers were registered via 37 Immigration Department offices, with each enrolment completed in 2 minutes on average. In the future, an additional 250,00 non- Malaysian maids are expected to be added to NERS upon the renewal of their work permit. Currently, NERS is planned to connect electronically to PDRM-BIOFIS and there are also plans to connect NERS to the Advanced Passenger Screening System (APSS) to speed up the screening process. 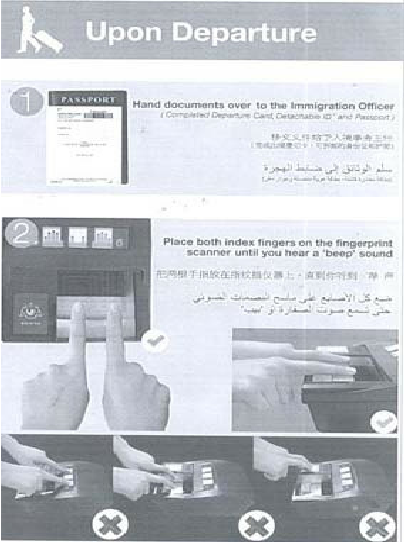 The figure shows an excerpt from an Immigration Department pamphlet describing the usage of NERS.

All foreigners entering the country obtain an entry pass. This is an endorsement in the passport, entry visa in addition to Malaysia issued in the country of origin concerned (when necessary), which allows visitors to stay temporarily. Depending on the purpose of the visit, the passes to be issued will be different:

• Short Term Pass / Social Visit: These passes are issued for purposes such as tourism, business meetings, attending seminars or competitions. A form (IMM.55) will have to fill out at the point of entry.

Visit passes issued for entry into Peninsular Malaysia are valid for entry to Sabah but visitors to Sarawak will have to obtain an endorsement or visit pass upon arrival at the Sarawak Immigration checkpoint there. A visit pass issued in Sabah or Sarawak, however, is valid for travel to the peninsular.

(Card In Lieu of Local Travel Document). If a Malaysian from West Malaysia intends to travel to Sabah/Sarawak, the easy way is to use card IMM. 144. This card is the alternative document for the Malaysian passport and Restricted Travel Document. This card is to be used for the purpose of Social/Business visit only. It is deemed to be a visit pass, which enables the holder to enter and stay in Sabah/Sarawak for a period not exceeding three months. This card is only valid for a single journey trip and can be obtained from the departure counters at any airport in West Malaysia on the presentation of the Malaysian Blue Identity card/Birth Certificate (if under 12 years of age).

(Card In, Lieu of Local Travel Document) This card is for travel facilities between Sabah and Sarawak only. This card is to be used for the purpose of Social/Business visit only. It is deemed to be a visit pass that enables the holders to enter and stay in Sabah/Sarawak for a period not exceeding three months. This card can be obtained at any immigration checkpoint in Sabah or Sarawak on presentation of Blue Identity card/Birth Certificate (if under 12 years of age) of Sabah or Sarawak. Note: Malaysians from Sabah/Sarawak do not require passports or any travel documents to enter West Malaysia. However, they need to produce an Identity Card/Birth Certificate (if under 12 years of age) at the point of entry. Source: The Information Malaysia Yearbook (92-93)

An arrival card may also be known as an incoming passenger card, landing card or disembarkation card. An arrival card is a legal document used by immigration authorities to provide passenger identification and a record of a person’s entry into certain countries. It also provides information on health and character requirements for non-citizens entering a particular country. Some countries such as the United States and Singapore attach the card to a departure card where the latter is retained in the alien's passport until his eventual departure.

A departure card, also known as an outgoing passenger card or embarkation card, is a legal document used by immigration authorities to provide passenger identification and an effective record of a person’s departure from certain countries. It also serves as a declaration in relation to health and character requirements for non-citizens entering a particular country. The departure card can come attached with its corresponding arrival card with the former being retained in the passport after passport control clearance. The card is then surrendered to passport control upon departure.

Some jurisdictions that have this system are Hong Kong, Macau, Malaysia, Singapore, Indonesia, USA, Brazil and Thailand. Hong Kong and Macau have the departure portion as a carbon copy of the landing card but the flight number, next destination and signature are left blank while the latter six have a shorter portion for departure cards which require less information, but they are joined together as with other to enable immigration officers to tear off one portion as with most ASEAN nations.

Beginning 1 June 2012, foreign visitors to Malaysia are no longer required to fill in the Immigration Disembarkation Card, commonly known as the IMM.26 Form.

Malaysia, do not require any departure or arrival cards to be completed. The procedure of compiling information from immigration cards was no longer required following the introduction of the biometric recording system by the Immigration Department.