MYPASS
Malaysia International Passport Model B : Federation of Malaya 1957 — 1963
Last Updated 13th April 2021 08:44:13 AM
It was estimated that 12,201 of British passports were issued during pre-merdeka rush in 1957.[1] Following the independence, the Immigration Department has on 15 July 1957 clamped down the issuance of British Passport only for those who were intended for genuine travel as in the running up months, people has been applying for British Passport without any travelling purpose.[2] [3]

Upon independence, the government of the Federation of Malaya ceased to issue British passports to a citizen of Malaya, even though the Federation Immigration Headquarters was still functioning to deliver passports for the person who can establish his status as a British Subject.[4] 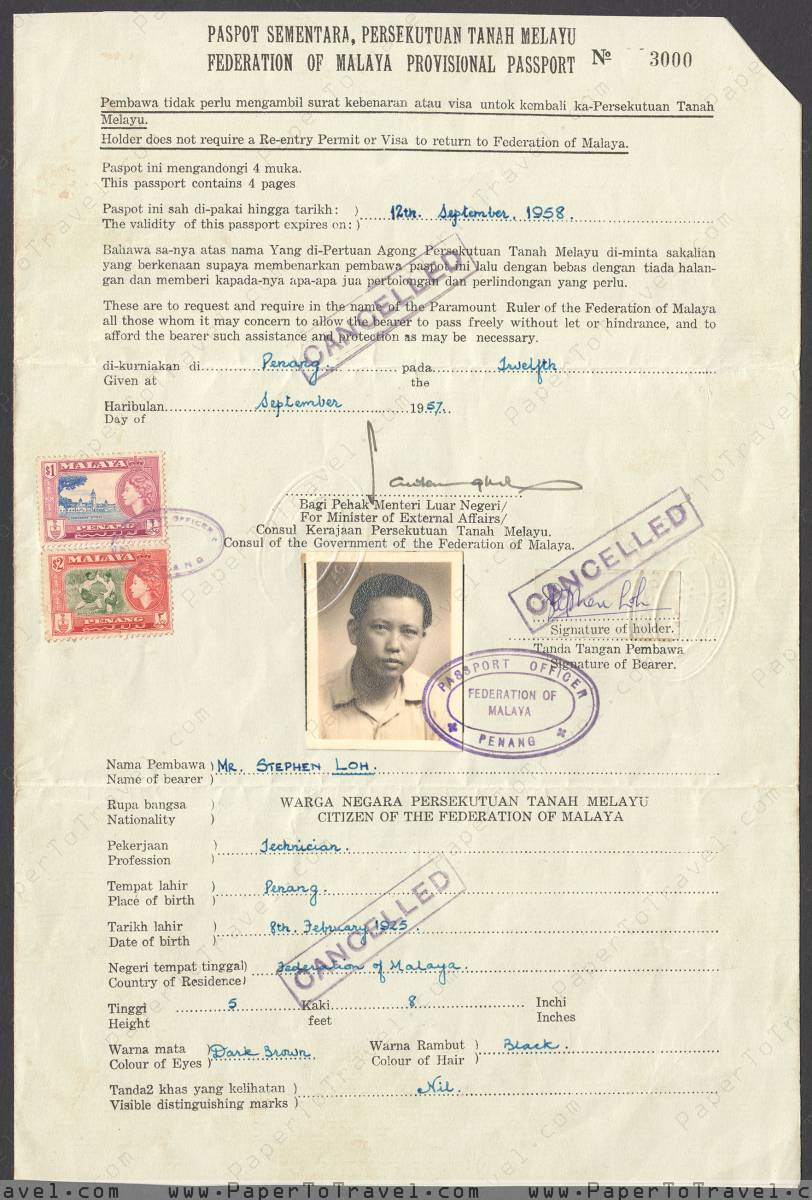 While waiting for the delivery of Malayan passports, citizens of the newly formed Federation of Malaya were given a Provisional Passport from Merdeka Day for a fee of M$3 and was meant to be exchanged for a booklet when the stock has arrived.[4] Due to a problem with the delivery of passport booklets, the provisional passports were issued until 1 March 1958.[5]

From September until December 1957, a total of 3,188 provisional passports were issued.[1] 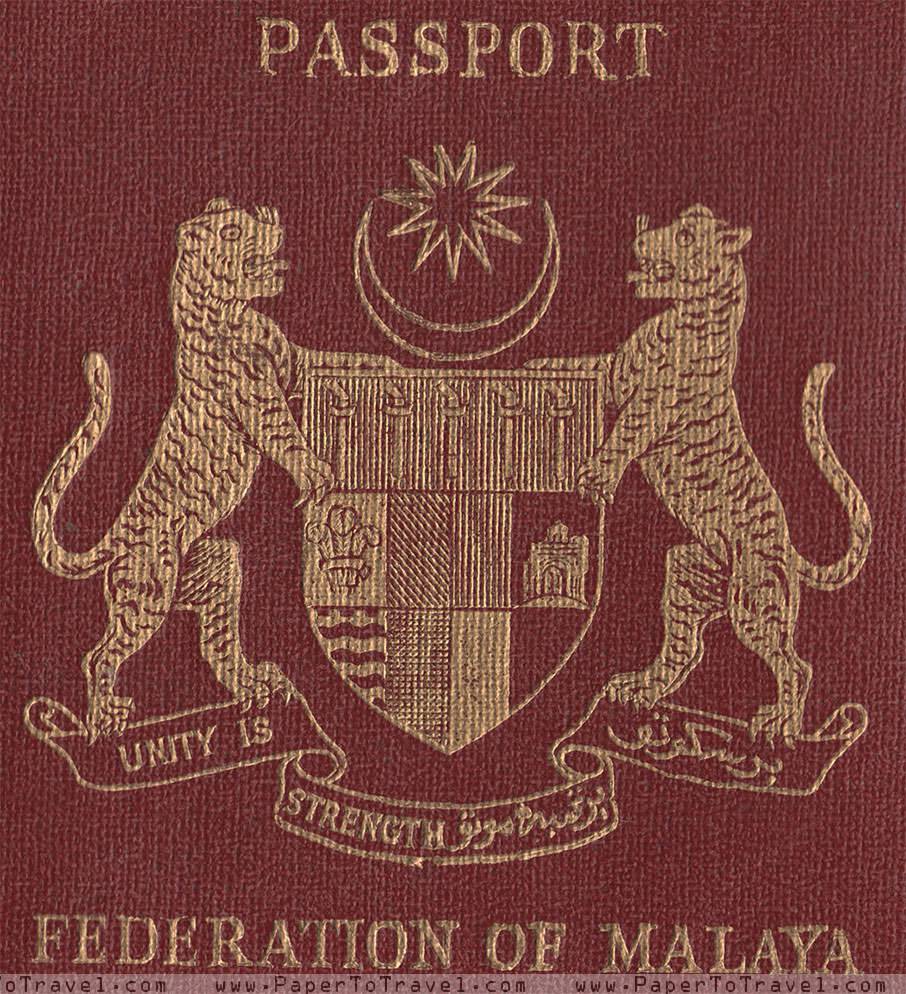 The Malayan passports which were only being issued from 1 March 1958 due to printer's printing problem[5] were referred to as Double Tigers quite heavily by the newspaper due to the major change on the front cover from British-Government coat-of-arms to one of Federation of Malaya's featuring two-standing tigers.

Each passport costs M$15 when introduced.[7] Passports were similarly issued in two languages, but instead of English-French, Malay-English was used. 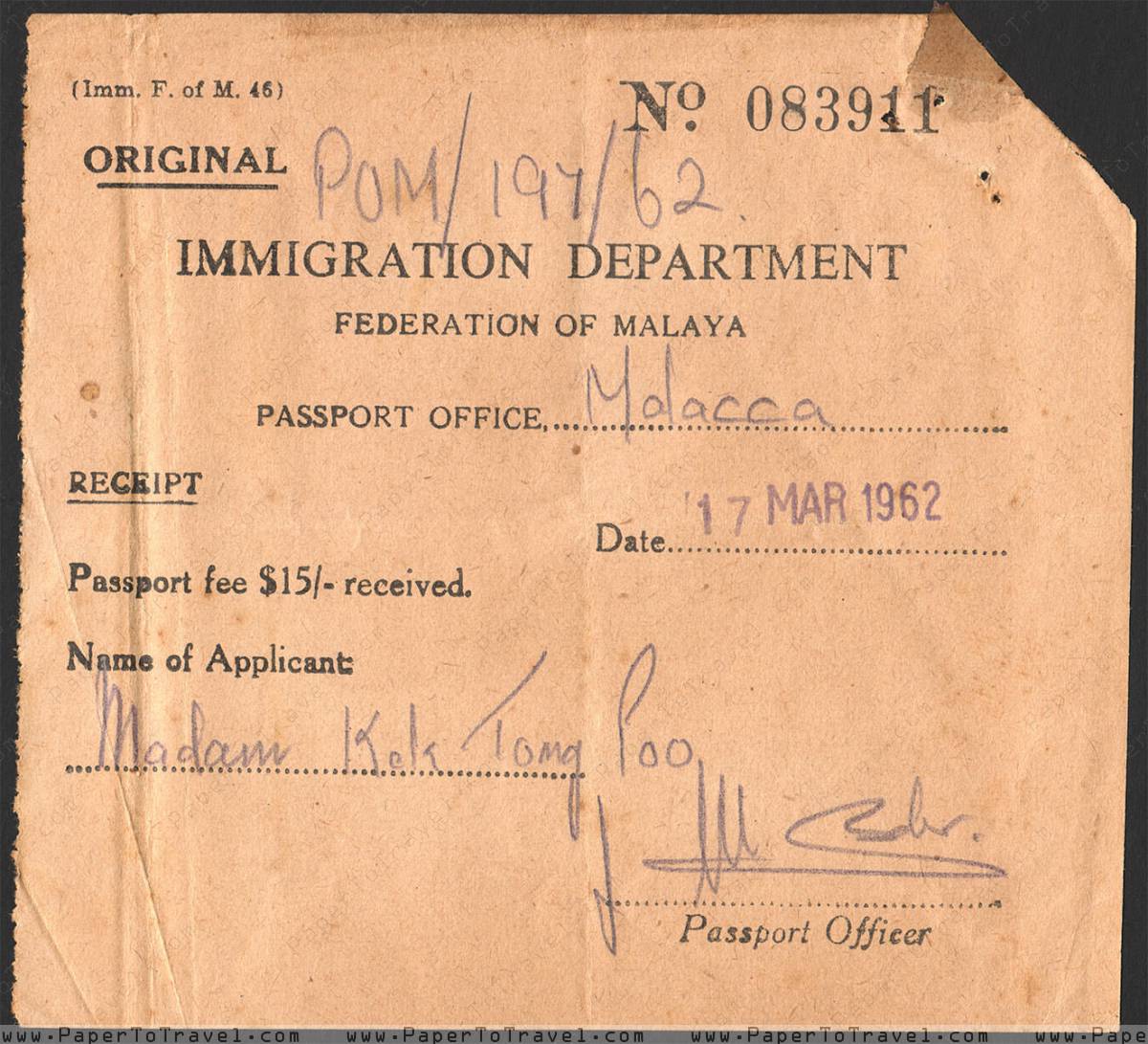 Other than language and spelling, changes made from British Passport to Federation Passport, are:
PHYSICAL STRUCTURES

It uses the old Malay spelling for PASPOT which first appeared officially, which was later changed to PASPORT in 1970.

Upon renewal, additional observations regarding previous passport information were rubber-stamped onto page 30.

The nationality and citizenship of the people were recognised as Citizen of the Federation of Malaya.

Whilst British Protected Persons (BPP) from the Malay states lost their BPP status, the Federation of Malaya permitted British Subjects from Penang and Melaka to keep their Citizen of the United Kingdom and Colonies (CUKC) nationality and at the same time enjoying the benefit of being a citizen of the Federation. This was made possible by not having any provision for the withdrawal and loss of CUKC citizenship in the constitution.

These dual-citizenship holders, however, were only permitted to use passports issued by the Federation. Enforced from 1 October 1958, anyone who was using a British passport for travelling may be deprived of his Federation citizenship by the government.[5] Note regarding dual citizenship was printed on the back cover of the passport.

Despite the Federation claimed that anyone born after Merdeka Day to having only one citizenship, male CUKCs are however permitted to pass their British citizenship to their children. But the legality of further issues was made complicated when the United Kingdom revised their Nationality Law in 1962 and again in 1983.

The request page was printed in two languages, Malay and English and was officially signed by issuing officer.

Malayan passports were made valid for all countries. Exception countries were rubber-stamped on page 4,

On later passports, a change was made with the reference of KOREA to NORTH KOREA probably after 23 February 1960, when Malaya and South Korea announced the establishment of diplomatic relations.

Unlike British Passports which were issued before independence, Malayan passports no longer require the holder to have a return permit when leaving the country.[4] However, for the restricted countries, endorsement for leave and return permit was necessary. 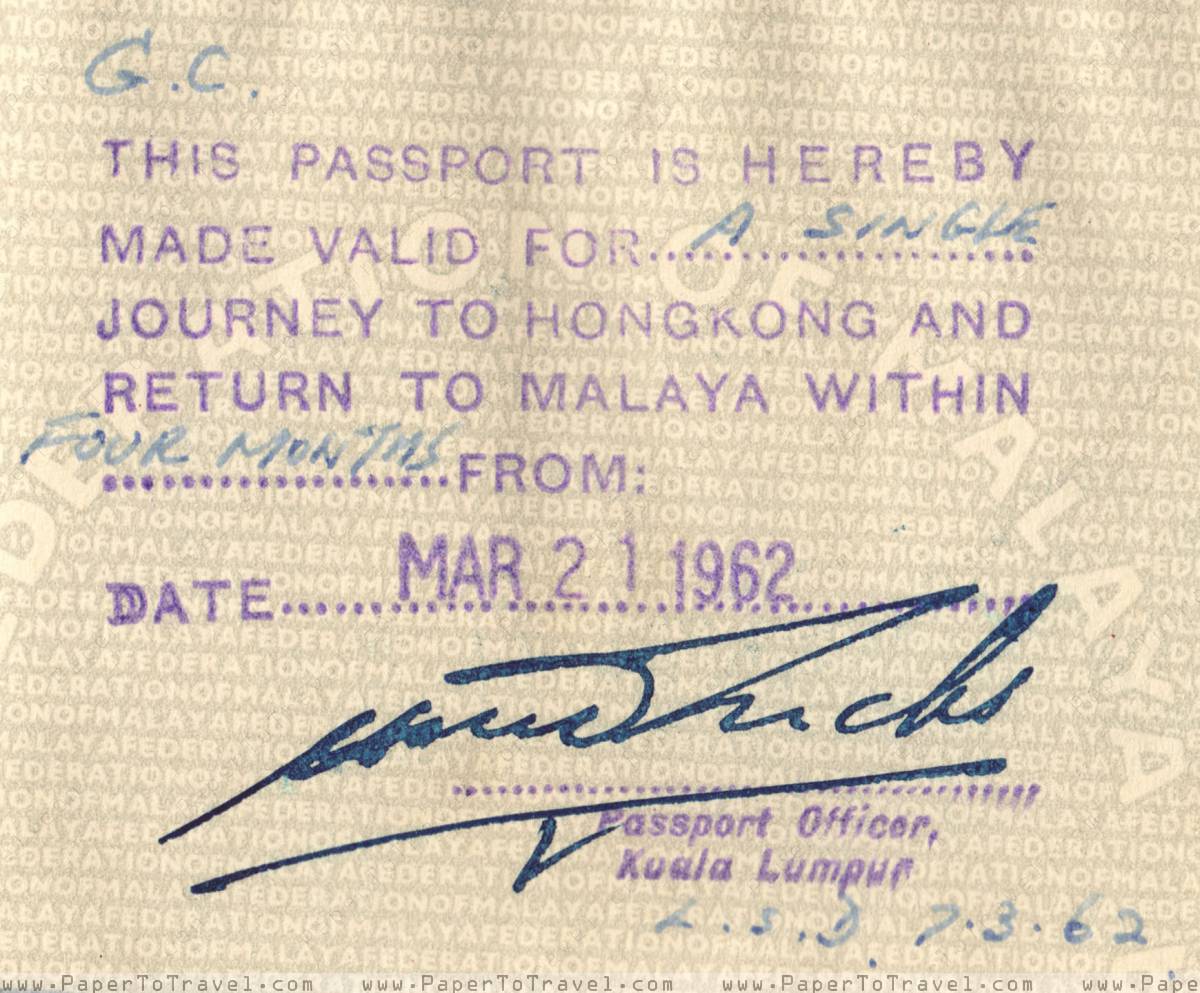 Notes and reminder were printed in two languages, Malay and English.

The Malay version has two wrong spellings marked in red.